(see our Circuit Plan for information about services) 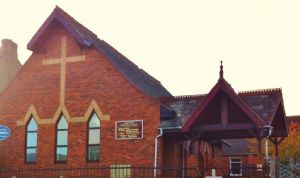 History of Medomsley Methodist Church
Methodism in Medomsley began in 1781 in the small cottage that still stands at the opposite side of the road to the Parish Church. It is now known as "Chapel Rise". As a result of hostility with the Parish church the members stopped using that building for worship in 1842 and began to meet, we believe, in the Temperance Hall, between nos. 36 and 37 Fines Road, where two houses now stand. A new church was built in 1871 on the site of the present church.
The new church was built of stone at a cost of £300-00 and seated 100 people. Very little is known of the church during this period, except that during the First World War five members were killed in action. A plaque is now placed in the vestry of the new church as memorial to them. In 1913 plans were drawn up to build a new hall at the rear of the church, but no other details are known. In 1935 a hall was built by William Taylor and Sons at a cost of £566-00 and it is still in use today. This building was opened on Saturday, 9th November 1935, when the preacher was Rev J Mace, chairman of the Newcastle District of the Methodist Church.

The next major change was in 1963 when, owing to mining subsidence, the church that had been opened in 1871 had to be demolished and the remaining hall converted to a dual-purpose Church. However, following the building of the houses at North & South Magdalene in the 1970's, the church began to respond to the need for activities from the increased population. A Boys' Brigade and a Girls' Brigade. were founded together with a Parent & Toddlers' Group and in 1976 the decision was taken to amalgamate Allendale Cottages Methodist Church with our church, leading to the building of a small hall in front of the existing building. The hall was built under the Government Job Creation scheme at a cost of £11,000-00 and was opened on Saturday, 16th September 1978 by Mrs. Jean Robson, a former member of the church.

The growth of the activities and the need to expand some activities led to the next chapter in the history of Medomsley Methodist Church… the building of a new church to take us, not only into the 1990's but into the 21st Century.
It was at a Church Council meeting on Saturday, 19th April 1986 that the idea of a new church really materialised, prior to that it had only been talked about. It was agreed to have plans drawn up and get costings for the project before the final decision was made and after their approved, the building of the church began in February 1988.The foundation stone was laid on Saturday 2nd July 1988 by Rev J G Mitchell, Chairman of the Newcastle District of the Methodist Church. On that day bricks were sold for people to write names or messages and these were built into the wall of the church, around the foundation stone.
The church was completed and officially opened by Rev J. G. Mitchell and Rev C. C. Colclough on Saturday, 13th May 1989.

At the time of writing ( March 2020) the premises are used almost daily, as a witness to the village with strong youth organisations.