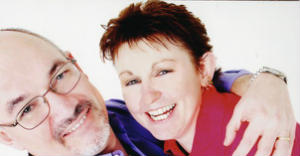 Stuart has been married to Claire since 1986, and they have two daughters: Amy (a community paediatric nurse working in Newcastle) and Naomi (in charge of the Open the Book International project at Bible Society’s HQ in Swindon), and a gorgeous grandson called Levi, born in 2017.

Stuart has previously served the Methodist Church in the Manchester area (15 years) and in North Tyneside (13 years), and came to Lanchester in 2014. He is also currently Deputy Chair of the District and leader of the District Property and Finance Executive, and co-leader of the national retreat for those about to be ordained, so has lots of plates to spin! His activities have included being a novelist, skydiver, Countdown Octochamp, and leading church groups to Nepal and Uganda. The most exciting thing he has done so far in this circuit is being Grumpy in the Summer Special Holiday Club.

Claire is a qualified teacher but presently works for their old circuit in North Tyneside, leading collective worship (assemblies) and Praise Parties in primary schools around the borough. She leads the ecumenical holiday club in Lanchester. Watch out for her magic tricks…